Nothing is impossible, it’s just an awful lot of work……!

At the beginning of he concert the audience got a small plate with four little sweets. The idea was to eat the sweets with different taste on special moments during the concert. The moment you had to eat was point-out in the beautiful program.
This farewell concert of the AMT was based on Wytze’s idea that a concert is more than listening to a row of pieces. A concert is a total experience of smell, taste, visual and auditive aspects. In this concert he shows us that. In this perspective it was more a show than a concert. 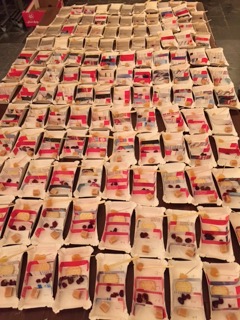 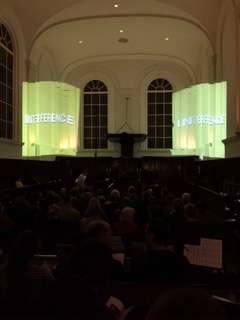 Starting with the incredible beautiful Bach fugue BWV 1080, Contrapunctus no.1 the concert was set. I saw no name of the quartet so I think it was the ‘ New Utrecht Saxophone Quartet’ who played wonderful. So in balance and in style. The young quartet had some trouble with the last cord but this was taken over directly by the deep tone of violist Yuri Shundyak starting the Marc Eychenne trio with Peter Sluijs on the piano. Here I missed the warm and colorful sound of a grand-piano. But very understandable considering the complex organization of this concert and the costs to hire a grand-piano. Wytze joined them later very smooth with his warm velvet sound. A beautiful crossfade. The whole concert was like this, all the pieces where linked together. This way you get the long line of the total experience idea. In general that worked, but because all the pieces had the same kind of length sometimes the concentration was gone. Than the not planned applause relieved the tension. Maybe you get a better balance with pieces of different length.
In the trio on Marc Eychenne your hear the deep love for the violin of the Algerian composer. As a violinist he knew how to write for his instrument. The saxophone was also sounding as a violin or is that the way Wytze played! This pieces was linked to the for me unknown Karel Arnoldus Craeyvanger. What a beautiful name! Played by Ruben Silva Kas on guitar. After that the famous Bartók solo sonate by Yuri also like Ruben, played on the balcony of the beautiful and warm church.
The tone of Yuri is very full, sometimes in the Bartók I needed more nuances, but his technical skills are superb. The solo sonate was written for Yehudi Menuhin in New York where Bartók underwent treatment for leukemia. It is a killer piece for violinists with all the specific technics and typical Hungarian folk intervals and harmonies.
After this highlight Wytze played his excellent highlight, Interference and made this into a big succes with a lot of bravo’s from the audience.

Nice was that Wytze programmed this concert with pieces in different settings. The saxophone was not always in the picture that gave a splendid nuance to the total experience.
The role of Wytze last night was special one. Wytze was; artistic director, programmer, producer, entrepreneur, musician, initiator, host, conductor, arranger, communicator and networker. An example for many of us!
When you organize a complicated concert like this there is always a danger of things going wrong. That was no problem for the the audience who was there in big numbers, a full house, sorry church!

Magic for me was the dancing of Marilou Hemmerlin on the minimal music of Marc Mellits. Mellits continues the tradition of Steve Reich, Philip Glass and Arvo Pärt but than with his own pop- and new-age harmony. Hella Termeulen song a great de Falla and Melle, Yuri and Peter toke some very exciting risks with the Rachmaninoff. When you don’t take a risk in live you never win.
Wytze took a risk and he and friends won! Celebrating in the last piece of Villa Lobos. The Brazilian composer who loved Bach so much. And so the circle of Bach in the beginning of the concert is completed.

A very special thing that Wytze at the age of 19 brought all those things together in a wonderful show with video-art, poetry, dance and music.

I want to taste more!